Last week I found out that many WordPress hosts ban many of the most popular plugins from their users. Most of these plugins are Related Posts plugins. I guess they are afraid of excessive database usage. However I myself was interested in this topic as I already made one related posts plugin myself, called Related Posts Lite.

Before you continue, please note, that this is only a server side performance review on one single server. This might differ on any server with different plugins and configurations. In this experiment every plugin is treated equally in terms of layout and usability – thus the review only takes the performance into account, nothing else.

I know, that most of you would say, that I should have used the P3 performance profiler plugin, but it simply felt more exciting to create my own method, which I know it won’t interfere with the results. I made a very simple PHP class, which is inserted into the themes functions.php file. That’s it. It outputs then some basic data to the bottom of the screen in a table format.

You can get the class code here: http://pastebin.com/7vRrGAKp

A few lines of CSS for the exact same table output: http://pastebin.com/sfKnr9rH

For the test environment a made a fresh new WordPress install on my local test server and loaded up a few things first.

Before anything, I picked a random post and measured the average performance of the server by refreshing the page 20 times.

This average tare performance will be starting point to compare the plugins with. If the class I created is instantiated with the “core” string paramater, it stores the upcoming data as “default”, “tare”, “core” data – thus the environment speed without any further plugins activated. Thus the initialization is the following:

What’s measured, and how?

The script outputs the:

However, the most important factor in these tests is the Load time and the number of Database queries. This test however can’t measure the server usage – one needs more powerful tools for that.

Steps of the test:

This test was performed on the following plugins:

All of these plugins are FREE and accessible via the wordpress plugin repository. Most of these are banned on many wordpress hosts, let’s se why.

For the output I picked two very important calculations.

Both values are in per cents, indicating how much of the page load time is taken by the plugins – the lower the better.

Let’s see how the test went. Some results are quite interesting.

As I said before, first things first, measure the core performance. After doing the 20 refresh pages I got the following results:

So the average page load is 0.179 seconds, the memory consumption is 17.5 mb roughly and 67 database queries were executed. These values will be subtracted from the ones the program is going to measure with each related posts plugin activated.

Yet Another Related Posts Plugin (YARPP)

This plugin is very very popular. It’s been around for over 4 years now. Let’s take a look at the values.

Yet another related posts plugin

This is also a very well known and high rated plugin. Let’s see how it performs.

This plugin has surprised me a lot. Well done.

I actually measured this plugin twice, because I though the results were inaccurate, unfortunately not.

This team has got some nice plugins on the market. Let’s see how they perform.

Every plugin was able to handle the test environment one way or the other. For better view, here is a performance chart of the measured values (the lower the numbers, the better): 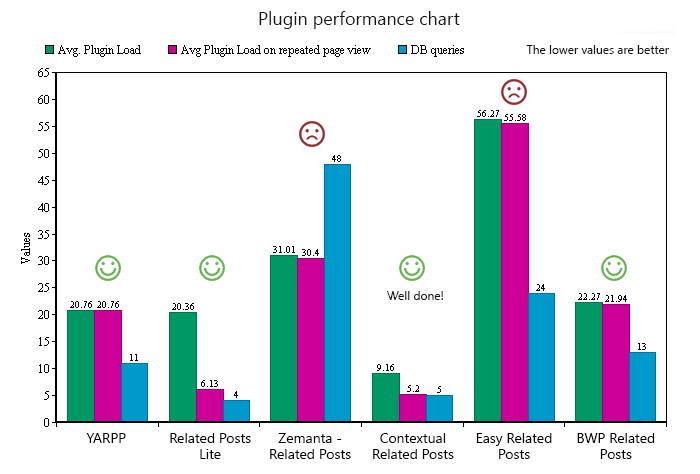 This is my honest opinion of the plugin performances:

Please note again, that these performances are based on this method. Different test environment and a different method might give you completely different results. This is just an insight based on my method.

Toggle the Widgetbar
We use cookies on our website to give you the most relevant experience by remembering your preferences and repeat visits. By clicking “Accept All”, you consent to the use of ALL the cookies. However, you may visit "Cookie Settings" to provide a controlled consent.
Cookie SettingsAccept All
Manage consent

This website uses cookies to improve your experience while you navigate through the website. Out of these, the cookies that are categorized as necessary are stored on your browser as they are essential for the working of basic functionalities of the website. We also use third-party cookies that help us analyze and understand how you use this website. These cookies will be stored in your browser only with your consent. You also have the option to opt-out of these cookies. But opting out of some of these cookies may affect your browsing experience.
Necessary Always Enabled
Necessary cookies are absolutely essential for the website to function properly. These cookies ensure basic functionalities and security features of the website, anonymously.
Functional
Functional cookies help to perform certain functionalities like sharing the content of the website on social media platforms, collect feedbacks, and other third-party features.
Performance
Performance cookies are used to understand and analyze the key performance indexes of the website which helps in delivering a better user experience for the visitors.
Analytics
Analytical cookies are used to understand how visitors interact with the website. These cookies help provide information on metrics the number of visitors, bounce rate, traffic source, etc.
Advertisement
Advertisement cookies are used to provide visitors with relevant ads and marketing campaigns. These cookies track visitors across websites and collect information to provide customized ads.
Others
Other uncategorized cookies are those that are being analyzed and have not been classified into a category as yet.
SAVE & ACCEPT